Generation X, Xennials, Millenials, Gen Z…they all love to play games. Save on some favorites of the decade with Black Friday game sales of 2020. We are the children of a century when any kind of game including board games is more fun than ever. Among them all, video games stand alone because the hardcore and professional players have their own platforms to stream their astonishing gameplays. Everybody can find something relatable in video games. And there have been some remarkable ones you might want to play on consoles. Two new consoles are now the most popular elements of the whole gaming world. During the Covid-19 pandemic, maybe games are more important than ever. They can keep you at home, you’ll never get bored because there are so many to enjoy. Movies? They are great, too. But they are not interactive and you have no control whatsoever but some games and their stores shape according to your choice. If you want to buy a Christmas gift for someone who has a console, these games will be great but check online if they are exclusive to one of the consoles. 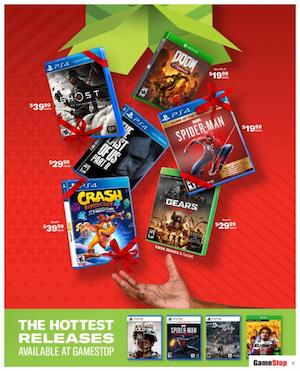 Walmart, Gamestop, Target, Amazon, and all other retailers offer great Black Friday Ads and all of them have some sort of game sales including the new consoles. I’ll list some really immersive AAA games that are exclusive or not on Playstation and Xbox. But mind that this is not a ranking list. It’s merely a collection favorites of most gamers who love a good story, too.

Black Friday Game deals are from either Black Friday ads or online stores like Amazon in this post. RDR 2 is one of them. You don’t have to use your gun to enjoy such beautiful landscapes of America. The fictional states like New Hannover and big cities like St. Denis are astonishing places and you will realize that while you slowly wander on your horse. Experience a true frontier story with Arthur Morgan who is the head character of this beautiful game. A masterpiece in my opinion. If you are a gamer, you would already know about it but if you don’t have a clue, watch the trailer and you’ll have an idea of what to expect from this great game. BUY IT RDR2 @AMAZON.

I won’t tell you that you will feel like a God playing Kratos in this masterpiece. Feel like the man who slaughtered the gods of Olympus Mountain climbing the mighty mountains of Viking lands. Feel the power of Kratos who can push a mountain to make way for his and his son’s journey to carry the ashes of his deceased wife to Jötunheimr. If you ever had just a tiny little bit of curiosity about the mythology of Nordic culture, you will find this game immersive, epic, and deep. Well written three-dimensional characters, absolutely fantastic score by Bear McCreary, and outstanding performances of Christopher Judge (Kratos), Sunny Suljic (Atreus), Jeremy Davies (Baldur), Danielle Bisutti (Freya). Target offers a great deal on the game but the deal is only valid until Saturday. BUY GOW @TARGET.

Uncharted 4 is definitely one of the unique gameplay experiences you will probably not find in any other game. If you are looking for a real adventure, nobody bested this game yet. Think of all the other games like Spider-Man, Batman, the recent Avengers game. Or perhaps think of all the Assassin’s Creed games. I don’t think even God of War can give you the sense of adventure that has the vibes of history, religion, pirates, and even prison and criminals. This game has amazing landscapes, too. Detailed modeling, plot twists, not that deep story but satisfying enough. And yes I think Uncharted is a Christmas game. But in my opinion not the masterpiece of Naughty Dog. The same deal of God of War is also valid on Uncharted. BUY UNCHARTED 4 @TARGET.

PS4 disc of Hideo Kojima’s latest game is on sale as preowned at Gamestop. Save over 40% off. To tell you the truth, DS is not for everyone. Many people disliked this game because most of the gameplay is only walking and drawing your path safely because on your path there is a great risk of getting caught by the BTs which are basically the main enemies. On the other hand, there are twists waiting for you. As a Kojima fan, I must tell you that I liked this game but not more than the MGS franchise. However, if you want to keep yourself busy and experience a very different kind of environment and some really weird character arcs, this game might be enjoyable for you. You will play as Sam Bridges who is a delivery man of a company called Bridges. The thing is, you will find so many Hollywood stars in this game that no other game probably ever had. Norman Reedus, Léa Seydoux, Mads Mikkelsen, Guillermo Del Toro, Margaret Qualley, and even Nicolas Winding Refn who is the director of Drive had a part as face actor in the game. BUY DEATH STRANDING @GAMESTOP.

After you finish this game, you will look at the abyss, you will wonder what to do with your life next. You will feel like crying but won’t. Even you had never a child, you will feel like you had one once upon a time. If you play this game immersively, you might even learn something about yourself. Not a mere zombie game or a post-apocalyptic game. The Last of Us has a story that is equivalent to an Oscar-worthy movie. The game has a score that you might want to listen to and think about the head characters. Loneliness, fear, survival instinct, and challenging puzzles. The remastered version of the game also has an extra story about Ellie who is one of our head characters. For the most part, you play as Joel. The Last of Us is a great game to play in isolation during a pandemic. Buy THE LAST OF US REMASTERED AT TARGET.

After finishing God of War I felt an urge of playing something else with a story that takes place in the Viking mythological era with those gods and stuff. I was already beware of the existence of this game so I gave it a go on a PC but it is perfectly playable on Xbox and PS. The horror of the Helheim, Surtr’s Domain, and more places of the Nordic mythology is where you play. Considering there will be a sequel to this game, I think it would be nice to finish the first one. It won’t take so long. Maybe the shortest game of what I listed above.

Hellblade offers another kind of experience with a psychic character. This game tries something to make you scared in a psychological way. It tries to lead you both in the right and wrong way. You may feel lost but it won’t impact the joy of the gameplay. You never feel like you are lost. Play as a Celtic female warrior who is trying to save her dead lover. She fights God and their warriors, mythical creatures like Surtr, to save his soul. Brutal landscapes reflect the Viking age while you try to escape dangerous situations. Unlike most games and movies with Nordic stories, the game focuses on the deep meanings of symbols. So many to talk about in this story. The deal is a 35% discount at Amazon. Pay under $20 for the game which is returnable until Jan 31. BUY HELLBLADE AT AMAZON.

A very good deal is waiting for you at Gamestop for a Middle-Earth game. Probably the best price of Black Friday Game deals 2020 for an AAA game. Are you hungry for a LOTR story? Do you need to see that ring again? Feel like Smeagol? Paying only $4.99, you can find yourself as a half-human (Talion) half-elf (Celebrimbor) in middle-earth trying to stop the Witch-King from forging a new ring. Ultimate conflict between the Dark Lord and Bright Lord. You can make orcs and Uruk hai work for you stealing their will and make them submit. Among all these games, the most detailed character-building features dozens of skills. The coolest moves like elven rage and wreath kill. Since it’s an open-world game, it will take huge chunks of your time and you will only get bored when you finish the story. Side missions are not as good as the main storyline. Buy preowned SHADOW OF WAR AT GAMESTOP for $4.99 only.

As a new game released in summer 2020, this is the best price that will be offered. People waited for a good Samurai game for years. Sucker Punch delivered well. Gamestop drops the price for the early Black Friday game sale. Pay only $39.99. The story takes place during the Mongol invasion of Tsushima island in the 13th century. The game lives up to its name and the combat is fantastic. You really feel like a lonesome Samurai in Japan’s medieval age. But the dialogs are really bad. Characters are a bit two dimensional. Before the game released I was watching the cinematic trailers and expected a more complex story. Also, the graphics, although looks good, feels a bit cartoonish compared to the titles of 2018-2020. But they look okay and the landscape has the vibe of that classic romanticism for Japan. In short, if you want to play a Samurai game, this is your game to play. BUY GHOST OF TSUSHIMA AT GAMESTOP FOR $39.99.

Okay. This game divided all gamers. There are many who didn’t like the story or questioned the motivation of some actions of Ellie in the game. If you ask my personal opinion, this is the best story that was written for a game. Note that I am saying that “for a game”. Since I am recommending these games solely for their stories but their gameplay is not bad either. Each one of these games is nominated for the GOTY award. I won’t talk about the story because it has twists and it’s not easy to not spoil it. But the game has been around for almost 6 months and you might have already heard some spoilers. But if you don’t have a clue, I must tell you first, you won’t play as Joel. You will play as Ellie and she is not the only person you will play. The price is very good at Gamestop. Save 50% off. I think this game deserves a $60 price, too. Long story short, this is maybe the only game that can give you the feel of a real post-apocalyptic America. In that sense, it’s really successful. Again, after finishing the sequel of Last of Us, you will find yourself looking at the void. (In console games, maybe Fallout 4 is good, too, but I didn’t play it) Check their videos if you are curious. I don’t care about the others, that’s just how I felt. BUY THE LAST OF US II PS4 FOR $29.99 AT GAMESTOP.

The gameplay of Witcher 3 is probably the longest or maybe equivalent to Red Dead Redemption 2 among the games we mentioned. If you haven’t played TW3, I strongly recommend you to play if you have an interest in the fantasy genre. In the third game of the franchise, you are looking for Ciri, as Geralt of Rivia, the Witcher on a big map. Just like RDR2, without killing anyone, it’s possible to enjoy this game just riding your horse, enjoying some taverns, mountains, rivers. I must also tell you this game has the best side missions. Sometimes you forget the main story while keeping yourself on a side mission. The game is now 5 years old. A good Christmas game. Buy TW3 for $39.99 at GAMESTOP.

You can subscribe to the newlsetter to receive more of Black Friday Game deals from these or other retailers.