Discover the lowest prices of the year with Target Black Friday Deals 1 Nov 2022! Hundreds of products are on sale with awesome Black Friday Deals! Products of top brands such as Apple, Garmin, KitchenAid, Shark and much more are featured on this Target Ad! 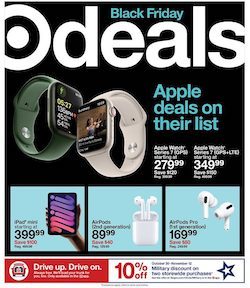 Black Friday 2022 is the day of the year when all tech lovers can reward themselves with premium electronics at particularly attractive prices before the start of the Christmas season.

Shopping activity at Target does not focus on a single product category. Whether it’s clothes, accessories or shoes or a gaming console, everyone will find something on Black Friday. In particular, you can see great deals in the electronics and Home & Living category at Target Black Friday Ad. TVs, washing machines, headphones, smartphones, laptops, gaming PCs, game consoles… The list is long!

Negotiations were eagerly awaited at Apple, as iPhones and MacBooks are known to be fairly stable in price. You’ll see up to $100 off Apple products at this Target Ad. Also, really good prices for PS5, Xbox Series X and Nintendo Switch are also eagerly awaited. Browse Target Black Friday deals now and discover great tech deals at low prices.

If you still want to buy an iPhone on Black Friday and are looking for cheap deals, Target is a great address. It’s almost time! During Black Week, a limited number of real bargains await you as well as special daily offers. From smaller gadgets for everyday use to inexpensive tech gifts to cutting-edge electronics, there’s something for everyone here. So don’t miss the Target Black Friday Deals!

Did you miss our Halloween deals? Don’t worry, Black Friday is back! Check out the Target Black Friday Ad or add items to your Wish List to prepare for the next sale.

As gamers, we always look for an excuse to bargain a good game. There are tons of great deals on games old and new every year during Black Friday 2022. Therefore, if you are looking for gifts or want to pamper yourself, then this is the perfect time.